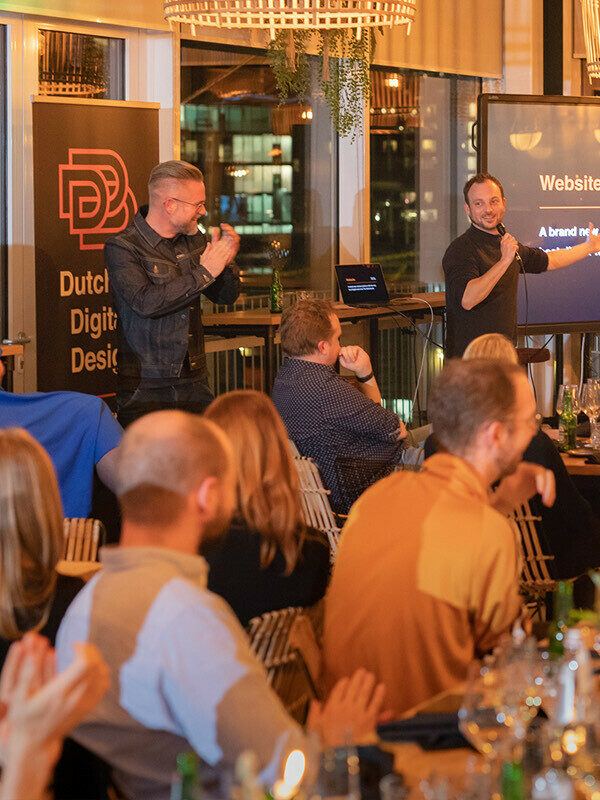 With over 60 participating agencies we can imagine it’s hard to choose where to go. To help you out a bit, Dutch Digital Design has highlighted the programs of some of their connected agencies. Dutch Digital Design is a collective, founded in 2014 by leading Dutch agencies. They showcase the very best Dutch digital work, selected by their curators, to promote Dutch digital design across the world. This is what they recommend during ADNIGHT.

Six agencies from the Dutch Digital Design collective (Adventure Club, code d'azur, Dentsu Creative, DEPT®, Media.Monks and Verve) are joining forces so enthusiasts and anyone else interested in digital design can find their way around on ADNIGHT more quickly and easily. Here's an overview of what each of the agencies will have on offer.

This originally Finnish agency, and in its own words the best kept secret in the world of Dutch (digital) agencies, will offer an insight during ADNIGHT into the often 'painful and chaotic process' that underlies creative work.

“Normally, we only reveal the shiny end-result of what we make for our customers and users. But during ADventure Night we want to tell the true story of the creative industry – from briefing to delivery. We’ve created an interactive experience that lets visitors see the 'monsters' hidden behind the glossy facade ad agencies put up. While at the same time giving a glimpse into the creative process. And then afterwards get over the 'pain' with a drink and some music.”

Creative tech agency code d'azur, which has opened offices in Austin, Barcelona and Dubai, will focus during ADNIGHT on the future of a world where consumer behaviour is increasingly influenced by technology, data, communication and creativity.

The programme includes Design for a sustainable future (with their client, electric car brand Polestar); Rise of the metaverse; The conscious machine is here! (Should we run and hide or celebrate?); A talk on modern AI, GPT3 and DALL-E); and The future of experiences. In addition, there’s the chance to create your own digital artwork, in-house progressive techno DJ rebrånded will be there, and Dutch producer & singer-songwriter Martijn 'Tinus' Konijnenburg, aka Goldkimono, will be giving a private concert.

The theme at Dentsu Creative Amsterdam (aka TAFKAD, or The Agency Formerly Known As dentsuACHTUNG!) during ADNIGHT will be the mysterious and exciting game of 'Ganbaru', which means 'determination’ in Japanese:

“If working in advertising was a Japanese game show, you’d get a golden egg that represents your ‘golden idea’. And to win, you’d have to reach the finish line still holding your golden idea… Ganbaru!”

DEPT® – Behind the screens

With the thought, or rather fact, in mind that technology is increasingly 'infiltrating' and determining our daily lives, B Corp DEPT® (which at the time of writing has more than 3,500 employees in more than 30 locations on 5 continents) will let visitors see 'behind the motherboard':

“Step inside our motherboard to take a look ‘Behind the Screens’, and explore the blurred borders between the physical and digital. Float through an infinite dimension of data to discover its endless possibilities. Expect edgy performances and experiences (get yourself warmed up for the algorave – a boogie to the rhythm of live coding) and many more unexpected ways to awaken your senses and (re)spark connections.”

Media.Monks – MMultiverse: Everything, Everywhere All Ad Once

At Media.Monks (with 9,100 employees and 57 offices in 32 countries), the focus of ADNIGHT will be on digital innovation and topics like the metaverse – and visitors will be invited to enter the Monastery's Multiverse…

“Discover and explore the Monks’ universe, and see how creative ideas take many forms within our various social, film and experiential departments. Each Universe will be represented by installations, ambient media and pure entertainment. For one night, on ADNIGHT, Access the MMultiverse and discover – Everything, everywhere, all Ad once!”

And finally, digital design agency Verve, which last year opened an Amsterdam office alongside its office in The Hague, and has recently joined forces with United Playgrounds, offers previously 'killed' ideas a new lease of life.

“Every creative has them: those ideas – often the very coolest ideas – that for one reason or another don’t see the light of day and end up in a dusty file on your desk. A crying shame!”

Verve dusts off these buried treasures and gives them the TLC they deserve, with speakers including Kirsten Swensen, who worked at WeTransfer for clients like Netflix and Gucci. In addition, designers of all ages, colours, seniority and roles can present their portfolio. And there’ll be screen printing of T-shirts (giveaway!).

All ending up with the 3 Ds: drinks, DJ and dancing on the roof terrace - before the afterparty in Paradiso kicks off.